Posted on February 21, 2014 by artsandmemories 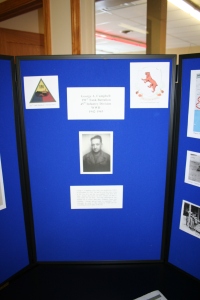 This program highlighted George A. Campbell’s WWII letters that he wrote home to his wife.

There were twenty-eight people in attendance from Riley, Randolph, Manhattan, Blue Rapids, Kansas City, and Glasco.  Our County Commissioner, Bob Boyd, even made it.

“Dear I don’t believe I ever described my $50,000 dollar home to you.  Well it is about four feet wide, six and a half feet long, and four feet deep.  I have fence posts over the top with boxes, straw, and what have you over them about two to three feet of dirt on top of that.  A few days ago Schwartz and Mitch’s fell in so they moved in with me.  Mitch weighs about 190 and Schwartz 175 so you can guess how much sleeping we did.  Schwartz still complains about his curves, we stuck him in the center.  He claims Mitch curved one way and I the other.  Well it was a dam sight better than taking chances on top the ground.  I never dreamed I would ever be living in a hole, but I guess one never knows does one.”

“Shell landed close enough to our hole to fill it with dust and smoke.  Shelling lasted for 1 hour.”

“Shell landed close enough to our hole to fill it full of dust and smoke.  Shelling lasted for one hours.”

“One tank left at noon the others leave at 1:00 tonight.  The push for Cisterna starts at 4:10 in the morning.  There are tank after tanks going up the road at 11:oo p.m.